It’s done. After days of hard work, rethinking and adjusting, rescripting and -editing I’ve managed to finally complete my TV package on the Isles of Scilly transportation issue. While it’s uploading to my vimeo-account, it’s time to evaluate the piece. 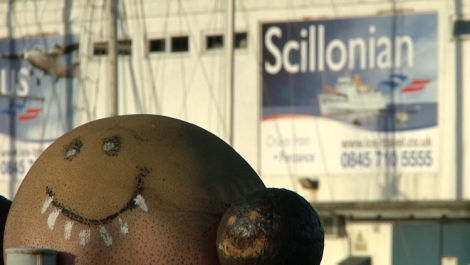 If I would’ve planned my days more, I definitely could’ve saved time and resources (especially fuel). For instance: I could’ve tried to get all my interviews lined up for the same day before driving up to Penzance. Or thought more precisely about whose views I definitely need to represent in the final piece and whose could easily be left out/ researched via Internet.

Apart from that: Next time I am surely writing up a short list of shots I definitely need, no matter what is being said in the interview.

In the end I went for four people who (more or less) represented different views on the topic:

Through this wide range of authoritative opinions and credible sources I was aiming to be as accurate, impartial and balanced as possible and meet the basic criteria of proper quality broadcast journalism.

Neil Moorton should give the piece an extra of authenticity as he is not lobbying for anyone but just worried about his own future.

After reviewing all my footage I decided to start with Dick Cliffe giving an overview on how important the tourism industry is – not only for the IOS but for Cornwall and the UK as a whole.

Followed by Marian Bennett dramatically summing up what the current situation for islanders and tourists who wanted to travel between the mainland and the isles looked like.

The next bit involved a bit of explaining by myself to bridge the narrative gap from FRIST’s point of view to that of the Steamship company, represented by Nick Sanders.

To wrap things up and give the story that extra bit of impact I then turned to what I thought the strongest quotes from Neil Moorton.

All in all and after going through two rounds of editing and voicing the piece up I am quite happy with the result: The shots mostly look crisp and well arranged (although Marian Bennett keeps looking past the camera – my bad: should’ve stood on the other side of it) and from my view the narrative and pictures go hand in hand and flow well.